I've run 15 ultras in my short ultrarunning career and have not really had any major setbacks. The 2014 Hellgate gifted me with some epic GI issues but they gradually sorted themselves out and I was able to finish strong. Apart from the normal ups and downs one expects in a 100 mile race, my 2015 Grindstone, and first 100, went pretty smoothly. Throughout these 15 races and all the training runs, I've learned how to run within myself, conserve my strength for the final third, and conquer most of the mental demons thrown at me. Perhaps I was due for a new lesson ... 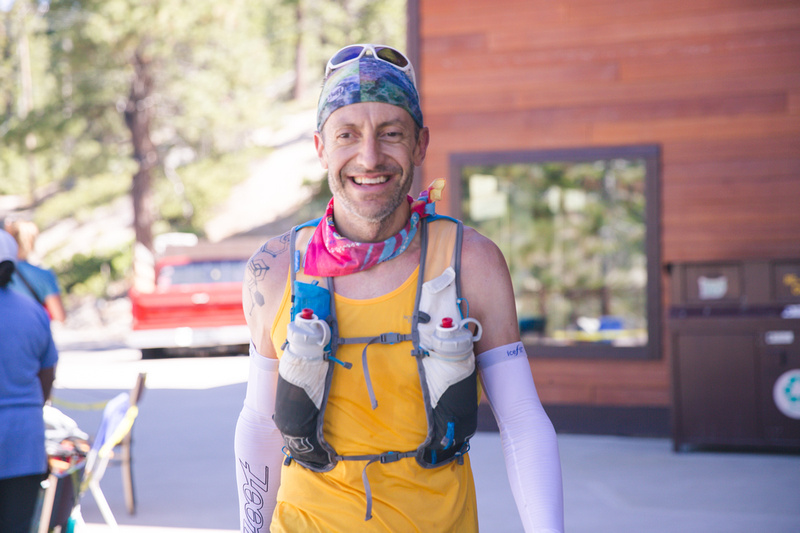 Tahoe is an incredibly beautiful place. While living in the bay area in the late 90s, I had visited three or four times to snowboard, hike and ride but (crazily) never ran a single step on Tahoe's amazing trails. What better way to start than heading up a sweet single track trail with friends as the sun rises at the beginning of a 100 mile run.

The first 30 miles went by in a blur of breathtaking views, random conversations, beautiful silence, fantastic aid station support, and unforgettable moments with my family. My nutrition and hydration were working perfectly, running felt effortless and even the steep climbs passed with relative ease. All those hours climbing hills and mountains back home were paying off. 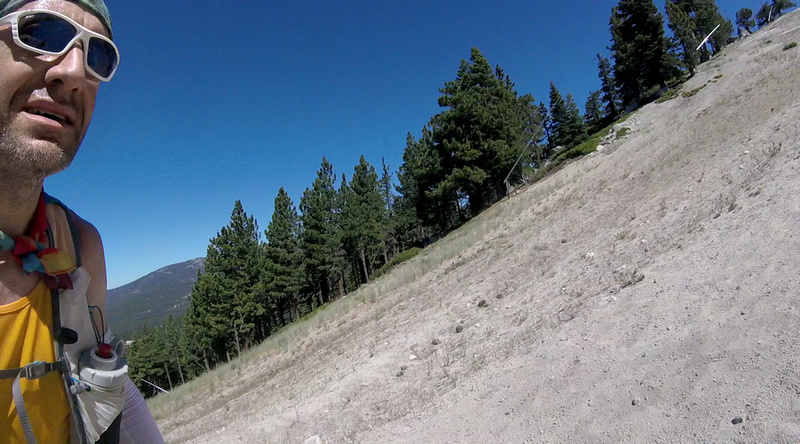 I caught up with Dan on the downhill section approaching the Diamond Peak 30 mile aid station. We briefly chatted about running together but he was so strong on the climbs I thought I would hold him back. This was quickly demonstrated by his rapid ascent of the 1700 ft climb after Diamond Peak - that man can climb! As I arrived at the next aid station, he was just leaving. Little did I know I wouldn't see him again for about 50 miles. 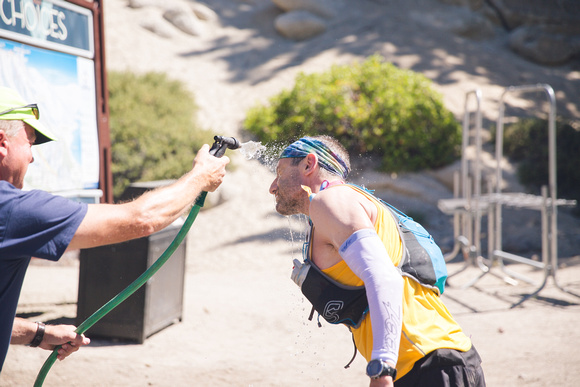 The rest of the first half went pretty smoothly and as I approached the halfway point I was in 10th place but starting to feel a little low on energy. It was pretty hot by this time and this section seemed to go on forever. Seeing my family at the aid station was the perfect antidote and my mood quickly changed. As another awesome volunteer helped me with my drop bag and some food, I sat on a rock and had a quick chat with Lindsey and my boys. I left feeling re-energized and ready to tackle the climb to Hobart aid station. 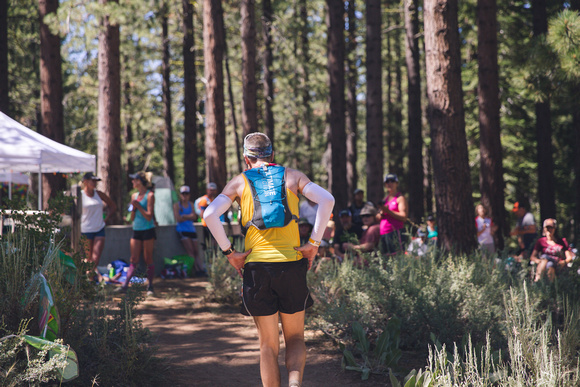 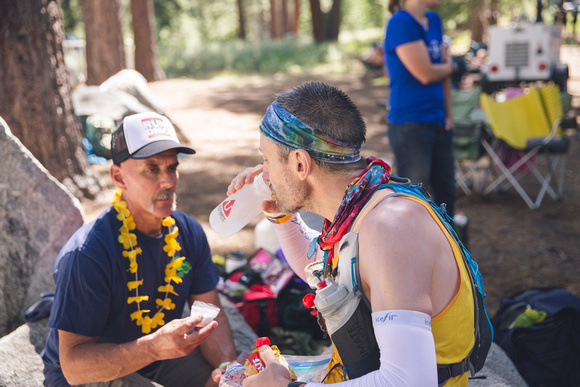 I headed down the service road out of the aid station. The road curved to the right and began to climb. I resolved to use trees as markers to run and power-hike at intervals until I reached the top. It felt just like being back home on my local fire roads. I focused on my breathing, on running to that next big tree - I was back in the zone and ready for the next 50 miles. 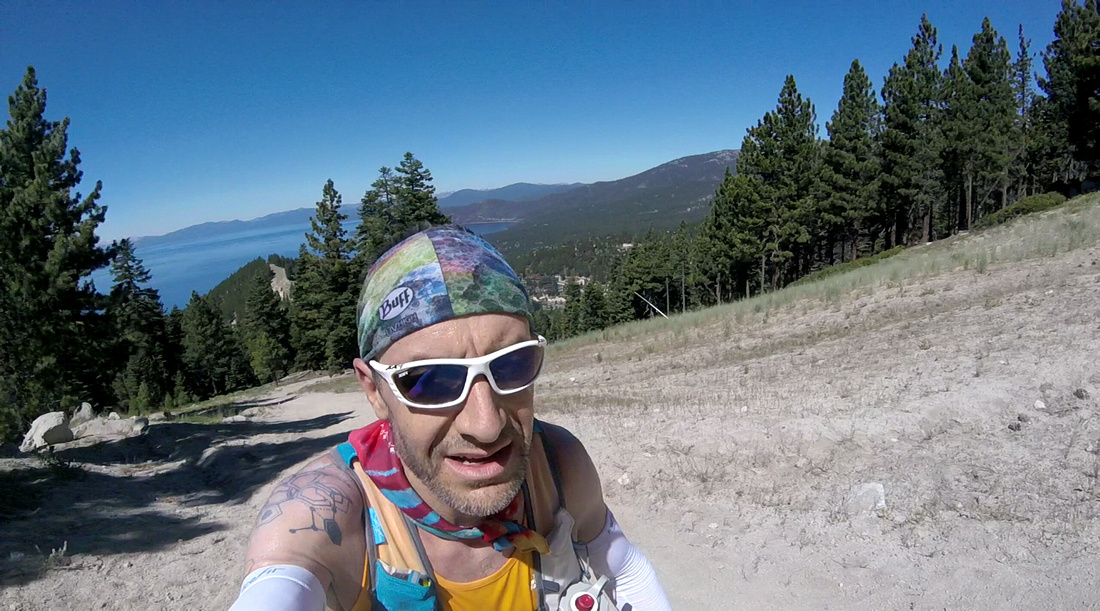 After about 40 minutes, I thought to myself: "I haven't seen an orange course marker in a while. The race director said we should see one every 5 to 10 minutes ...". I carried on for another five minutes, refusing to believe I had made a wrong turn, before I finally decided to backtrack and find a marker. After being off course for more than an hour, I eventually found a course marker and made my way slowly, very slowly, up the climb to Hobart. I was almost out of water, my brain had instructed my legs to not run another step but at least I was heading in the right direction. A passing runner let me know I had 4.5 miles to Hobart. I sat down on a rock to contemplate my fate - things could be much worse, I'm thirsty but I can still move. I remember that I threw my cell phone in my pack at the halfway point - maybe I can call Lindsey for a pep talk ... I get up and slowly march up the hill, watching my phone for the appearance of a single bar of signal. At some point after passing Marlette Lake I got a signal and reached Lindsey. Those few words of encouragement helped change my perspective and I found some new energy to make my way to Hobart aid station.

Some three hours after leaving the halfway point - and after running about 8 miles more than I should have - I arrived at Hobart, a journey that should have taken less than 90 minutes. But I wasn't out of the woods yet ... I must have looked a little worse for wear as the aid station doctor made me sit down and drink until I could pee before she would let me head off to the next aid station. The volunteers were amazing, bringing me water, food, and even a space blanket when the temperature started to drop. Eventually I was able to get a coke-colored liquid out of my body and I set off on my way to the Tunnel Creek aid station where my warm clothes and headlamp were waiting.

Darkness came and, after a few hours of shuffling and hiking and longer than normal aid station stops, I found my way to Diamond Peak aid station (mile 80). At this point I was pretty exhausted, the mental strength I had found to get myself going again had begun to dwindle and I was contemplating a nap at the aid station before heading back out. I look over my shoulder and see Dan and Jeff, both of whom had faced their own challenges over the past 50 miles, grabbing some food at the aid station. We swapped stories and headed out to climb to the top of Diamond Peak resort. While we weren’t moving fast, we were moving in the right direction and the chance to cover the last 20 miles with friends was the perfect ending to the race.  When I started running on Saturday morning, I had hoped to finish before sunrise the next day. As the sun began to rise again, we still had a few more climbs and another 15 miles, but I felt a renewed energy and could feel the finish approaching. I passed through Hobart Aid Statioin, high-fiving the volunteers who had helped me recover the day before, and after cresting Snow Valley Peak, we ran/jogged most of the way to the finish in 28:28:41, where my family and a tasty vegan burrito were waiting. 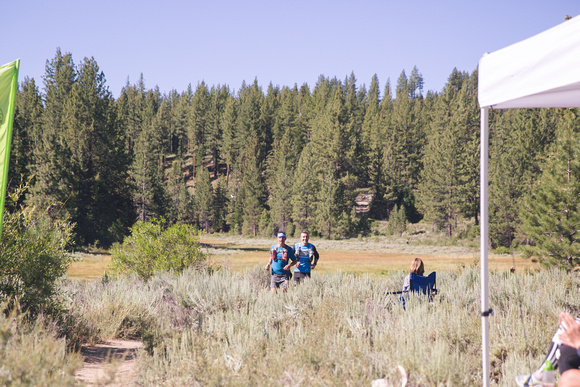 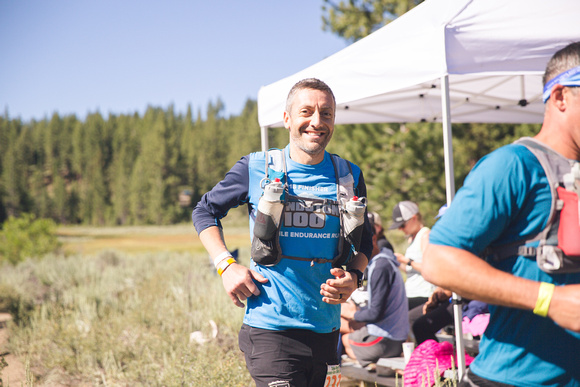 I’m a lucky man - not only did I get to run 110 miles around Lake Tahoe seeing two sunrises and one sunset; I got to camp at Lake Tahoe for 5 days after the race with my family. Sitting by the lake, looking at the mountains I had run through just a few days before, I had no regret, just amazement at what our bodies are capable of doing. While I sometimes have a time goal in races, my main goal is always to finish and have fun, knowing I couldn’t have tried any harder on the day. I pushed my body harder and traveled further than I thought possible. That was definitely true this time. Getting lost was bad, getting dehydrated was worse, finding the strength to recover and push myself to the finish was transformational.

Until the next adventure … 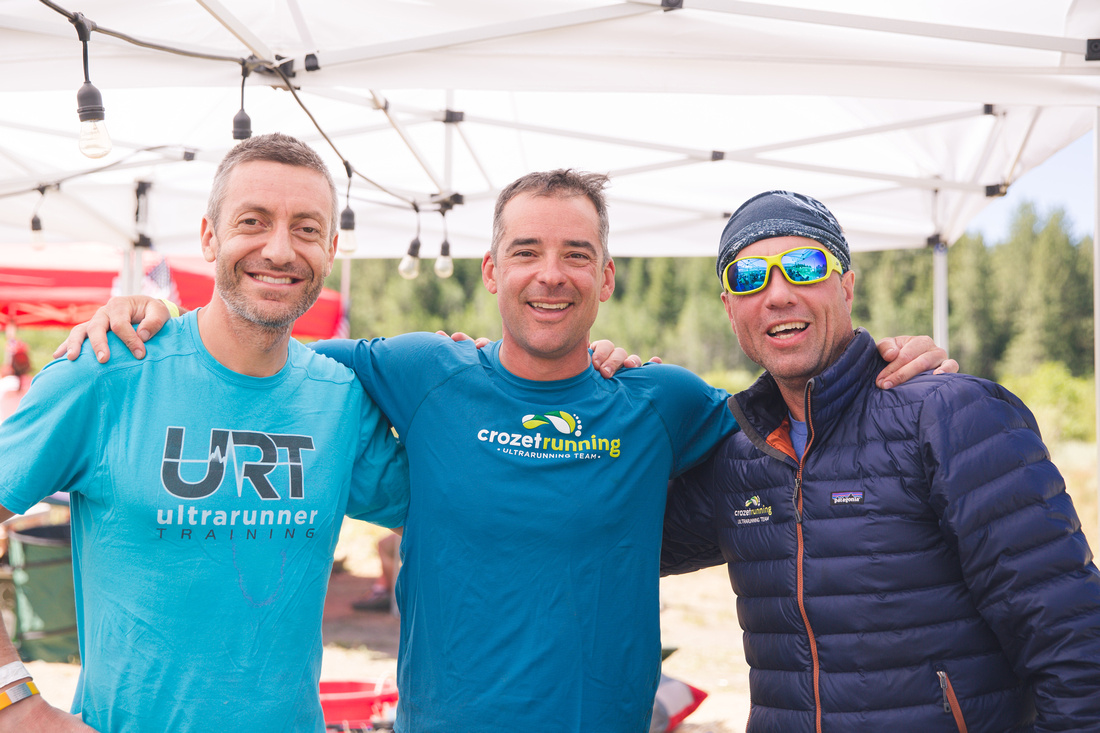 Rice balls with miso paste made by my lovely wife

Bananas, watermelon, oranges and avocado wraps at the aid stations

"You are truly talented - not just your eye and your lens; but with your heart - that seeks and touches moments of utmost humanity to capture them and hold them in photos."